Cindy Brummer is CEO and Creative Director of Standard Beagle, and our company’s founder. A designer, developer and all-around go-to-gal, Cindy has been working with online media since 2003. She is passionate about user experience, interactive design and fantastic content. She launched Standard Beagle in 2012. She loves building websites, working with her clients, and solving problems. Cindy is a UT grad, former Crossfitter, and mom to her two little joys.

I have a long day of work ahead of me today, so I’m glad I got my exercise in early.

Today was running day.  I met Jenny a little earlier today at Walnut Creek Park for our run.  It was cooler, but still quite humid, and I felt weak.  I had to walk more today.  I’m not sure if it was the air or the extreme soreness all over my body, but I just couldn’t keep going.  I was sopping wet just 5 minutes into our run, and though I brought the Camelback today, it wasn’t water that I needed.

I woke up later today, and I did not eat before the run, so I think that had something to do with my lack of energy.  It’s hard to eat so early, but I still need something.  Usually I eat at least half a banana, but they were all gone today, so no pre-workout meal.

Our run/walk took about 40 minutes today, which isn’t bad.  We decided we would just keep plugging away at it through the summer, because running is bound to feel better when the weather turns colder.

Jenny and I continued our weekly runs this morning with a visit to Walnut Creek Park in North Austin.  I haven’t been there in years, and although I dislike the creepy Saturday morning drive through sketchy parts of North Lamar, the park itself is really nice.

This park is quite popular with mountain bikers and people with their dogs, although I did see a couple of other runners there.  Jenny and I took off toward the west on a trail from the playground area.  The terrain varies from rocky and hilly to flat dirt paths, and we backtracked at least once after deciding that we didn’t want to ford the creek and run in wet shoes.  We decided to find another path across that creek.

I noticed that I was able to run faster and for a longer distance without stopping today.  But we did not go as far.  Jenny guessed that we ran about a mile, maybe 1 1/2 miles.  The run took us about 30 minutes.

I was pretty worn out near the end, and both of us were dripping in sweat.  We sat down on the back of my car, sipping water, and decided it was time to move up our runs.  It’s just too blasted hot.  But we’re doing it again next week, and next time I’m bringing my Camelback.  I bought a new bladder for it today, so I’m ready.

I will get better at running.  I will.

You’d think I would have learned my lesson the last time I heard a voice in my head hope that the WOD did not include an exercise that I dread. Because every time that happens, we end up doing that very exercise… with a vengeance.

This morning, a little voice in my head said, “I hope we don’t have to run.”  “Shut up,” I thought back to myself.  “Shut up… you’ll jinx it.  You’re showing up and you’re gonna do what you have to do.”  “Yeah,” replied the little voice.  “But I still hope there’s no running.”

Argh.  So what was the WOD?

This was a very hard WOD. Probably one of the hardest yet.  Anyone who knows me also knows how much trouble I have with running.  And there were several times I had to slow down and walk.  By round 4 I had a stitch in my side, although not bad.  I tried hard to keep up with two other girls that were going slightly faster than I was, so it was motivating.  I could hear a voice in my head saying, “I’m not going to die.  I’m not going to die.”

Zach fussed at me about my pullups (jumping, of course — but I felt much stronger doing them, like my arms were doing more work this time).  He said I gave up too soon.  We were supposed to start the next round if we stopped doing pullups for more than 5 seconds.  I made it to 20 on one round, and Zach gave me hell, because all my other rounds were 10 or 15.

At the end of the workout, I had to sit and catch my breathe.  I felt sick.  Zach said, “You gonna make it?”  I nodded.  He laughed an evil little laugh… then told everyone to get a PVC pipe.  Our followup workout was 3 rounds of 20 overhead squats and 15 sprawls.  I nearly puked.

I finished 5 rounds + run  / 70 pullups.  Pullups were low, but I’m working on it.  Great, but grueling workout.  And for me, even though a little voice did not want to run, it was a good day.

The best advice for showing up to workouts… don’t think about it.  Just show up, do it the best you can, strive for improvement, and know that sometimes you have bad days and sometimes you have good days.  Let’s just hope that the good ones outnumber the bad. 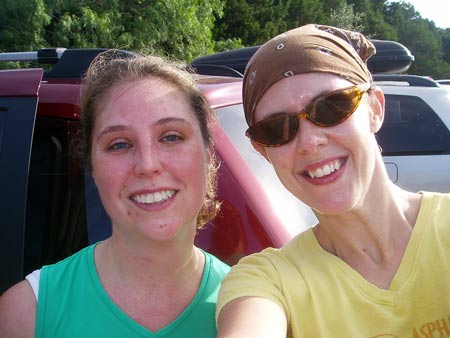 I found a trail running buddy recently, and we met this morning for our first run together.  Now, I have always had a hard time running, but I want to improve my endurance, and I’ve been thinking about trail running for a long time.  You get to be out in nature, the trails have hills — so the uphills are good training and the downhills are good rests periods — you improve coordination because the trails zig-zag and you have to navigate rocks and turns… all in all, it seems like a good workout.

We met at the greenbelt trailhead off MoPac, just south of Loop 360, at 7:30 a.m.  It was still cool outside, but the sun was beginning to warm things up.

My buddy Jenny already runs — mostly inside — and she thought trail running would be a good change of pace.  It’s good to have a running buddy like her because she can keep moving no matter what, and that’s motivating.  Also, she doesn’t mind running at my pace, so we were able to stop and walk every so often when I was fading.

It was an awesome run.  I went farther than I thought I would be able to… and the toes affected by the neuroma in my foot only started to go numb near the end of the run.  If I had to guess, I would say we did 3 miles.  It seemed like we ran 1 1/2 miles in from the trailhead before turning around.

I wasn’t as prepared as I maybe should have been for this run.  I should take my Camelback next time — which means I will need to buy a new bladder and tube, since the old ones are probably moldy — and it wouldn’t hurt to have a moisture-wicking shirt, rather than cotton.  A GPS watch would be nice to track distance… but that definitely won’t be my next purchase.  I don’t want to invest too much in this other than shoes — it’s just once or twice a week.  But it sure was fun, and we’ve already set up a time to run again.