This is the first year Luke has brought up the approaching holiday season without prompting — at least from my husband or myself. 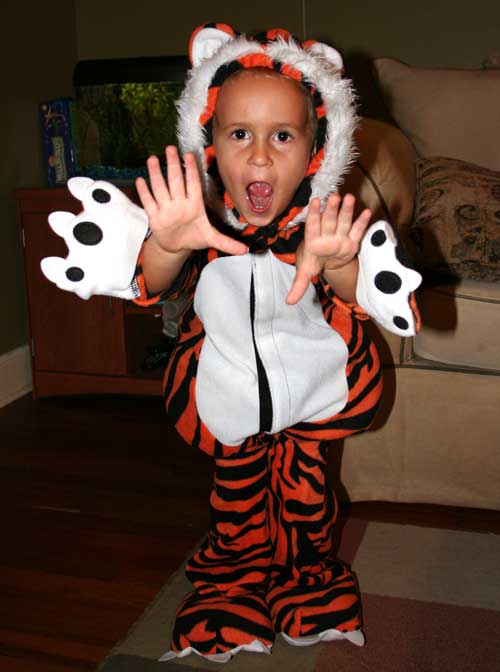 He knows Halloween is on the way, and he requested a costume this year. A TIGER!  ROAR!

I was worried I wouldn’t be able to find one that’s reasonably priced.  Have you SEEN the prices for costumes at those fancy kids stores?  Yikes!  I also wanted to avoid a cheapie.  I remember wearing a very cheap plastic one when I wanted to be Smurfette at age 6.  Remember those costumes?  They came in the box with a cheap plastic mask?  What were my parents thinking?  It was horrible!

I lucked out and found a tiger costume at Old Navy for only $15.  Yay!  It arrived in the mail today, and Luke just had to try it on.  I have a feeling he’ll want to try it on every day for the next several weeks.

He also knows Christmas isn’t far behind Halloween, and all he wants to talk about is Santa.  But what’s so cute is it isn’t about Santa coming to our house to bring presents.  Santa comes to KVUE, and we sing and dance, eat cookies and listen to a story.  This will be our fourth year to attend the Christmas special taping.  It’s always so fun.  We get a copy of the show after it airs, but I don’t think Andy and I have ever watched it.  It’s about the experience for us — not so much being on TV.