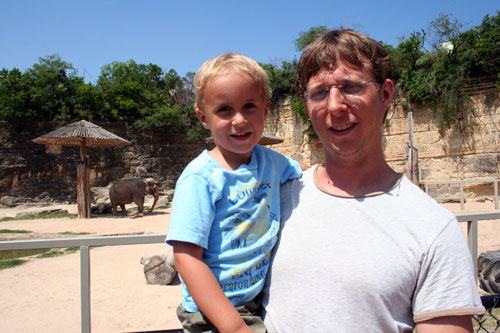 Elephants, giraffes, kangaroos… all of these animals are missing from Austin’s Zoo.

Don’t get me wrong — I love the Austin Zoo and admire what it stands for (taking in exotic animals that were once kept as pets or abandoned).  But it’s not a REAL zoo — not like what most people think of when you say “zoo.”

San Antonio, Dallas, Fort Worth and Houston all have larger zoos, and Andy and I figured it was time to take Luke to one.  San Antonio is the closest and we have never been there, so we looked up directions and headed out on a hazy Memorial Day morning.

We made the mistake of printing out directions from Google instead of from the zoo itself, and Google took us to the wrong part of town.  We circled around looking for the zoo and/or visitor’s center so we could actually find it.  While we were there, we stopped and took our picture in front of the Alamo, just to prove we saw it.  We didn’t linger — it was all about the zoo, dang it!

The San Antonio Zoo is really nice.  I’ve been to large zoos, and this one, even though it’s not huge, has some really nice areas. I figured it would get really crowded, and it did — but not overwhelmingly so.  There was still room to maneuver the stroller and plenty of shady areas to stay out of the blazing Texas sun.

We didn’ t even make it everywhere, there was so much to see.

Luke had a BLAST.  We liked it so much, we bought a membership while we were there, figuring we would be back enough over the next year to make it pay for itself. Now that’s what I call family fun.