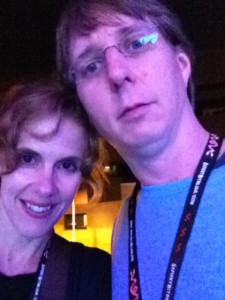 I’ll admit it right now — I don’t get out much.

Kinda hard when you’ve got little kids and piles of projects in your lap.

But when I do, I try to make the most of it — by eating at the restaurants I read about on all of those foodie blogs I love and seeing live music.  Austin is such an awesome place to see live music, especially by bands you’ve never heard of before but are fantastic.  It goes without saying that South by Southwest is a prime time to check out some new bands, and Andy and I had a chance to do just that. 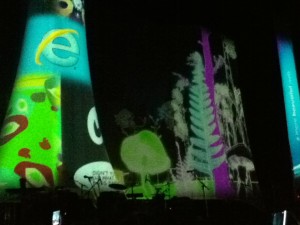 We lucked out in scoring fast-passes to the IE9 Launch Party, which was held at the Moody Theater — the new home of Austin City Limits Live at the new W in Downtown Austin.  (Fabulous venue, by the way).

Microsoft pulled out all of the stops for this party.  I wasn’t much interested in the free alcohol, but the theater itself was amazing.  The stage was all lit up with amazing graphics, and the screens were showing projected 3D.  It’s so hard to describe.

One of the opening bands was Fences, who are pretty good.  I really enjoyed them.

They must have hired a really good DJ, because even the house music in between sets was good.

At 11pm, the theater darkened and the background lit up with all of these colors as an announcer said IE9 was being launched at that moment all over the world.  It was such an event, even I (a devoted Firefox fan) wanted to download it.

But what really got my attention was the next band: The Head and the Heart. 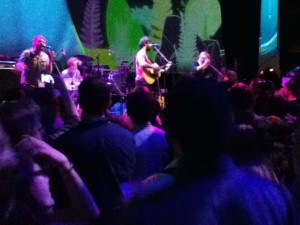 Talk about energy!  The harmony of rock and folk sounds caught me, and I never lost interest.

Very few bands have instantly appealed to me.  Usually it takes a few listens to get into them — but this band was different.  They’re from Seattle.  NPR did a story on them here.  And they reviewed their SXSW set here.

I was exhausted, but we stayed longer than we originally planned just to hear as much of them as possible.  The next day, I downloaded their album, and I’m loving it.  To be honest, it doesn’t have the same level of energy as what we say live, but it doesn’t detract a bit.

If you get the chance to see them, I highly recommend going.  They won’t disappoint.